Showing posts from 2015
Show all

A Day of Beginnings and Transitions 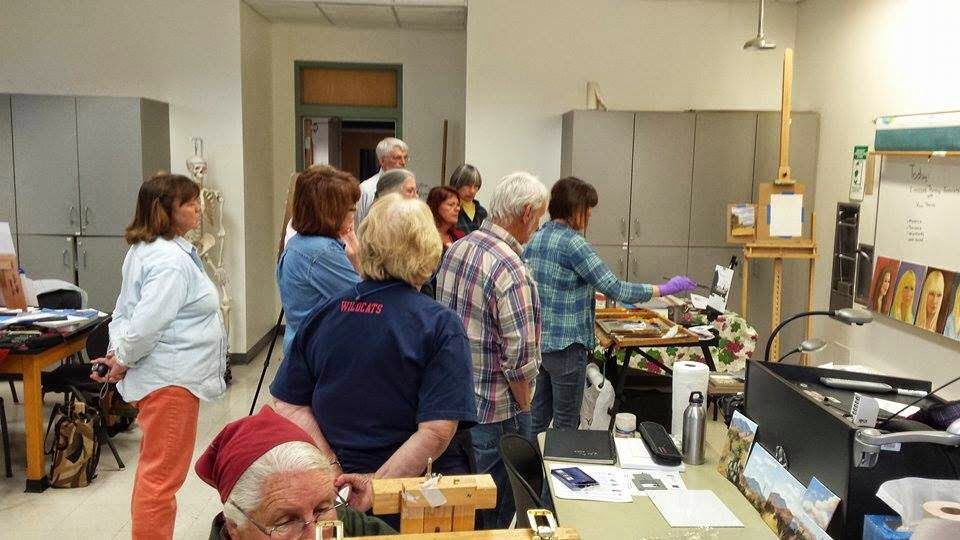 Giving a value study demo for the class (photo courtesy of Clement Scott)
So, not only was the day of March 20th the first day of Spring, the new moon, AND a solar eclipse, it was also my first day of teaching a class and giving a demo! Of course it was a very nervous day for me, and I'm pretty sure I drove my family and close friends a little nuts with all that nervousness, but it was also a very exciting day that ended up being such a great experience. For one thing, I learned that I actually enjoy teaching, and even more so, giving a demo!
A progression of my black and white value study (photo courtesy of Louise Walden)
This class was part of the Art 130 course at the Cochise College in Benson, Arizona, taught by friend and fellow artist Clement Scott. He had invited me to be guest instructor for the introductory day of landscape painting. I am very grateful for the opportunity and so happy I was talked into it! The students were great too! There is something about being around …
Post a Comment
Read more

"Old Practice" 6x12 in. oil painting, one of three pieces that was accepted and sold at the  Albuquerque Museum Miniatures and More Exhibition Fundraiser in November 2014

So, I came to realize that it had been 5 months since I wrote a blog post! It is shocking how time is flying by these days. It just so happens that those past 5 months contained some very post-worthy events that I am going to do my best to recap and get us up to date here.
I was deeply honored and thrilled when I received the acceptance notice that I was juried into the 2014 Miniatures and More Exhibition fundraiser at the Albuquerque Museum of Art. I may have unleashed some squeals of excitement upon finding out. The show started at the end of October and ran through November. I entered three pastoral/landscape pieces and only two returned home...  the above painting had sold during the show!

Also in November was the Heather Green Studio's Annual Anniversary Show. The theme was flowers (yay!) and I was …
2 comments
Read more
More posts

Kaia Thomas
My name is Kaia Thomas and I'm a painter living in Southeast Arizona. This blog is a journal showcasing my art and available paintings for purchase, along with the processes I go through in creating the art, and random thoughts on life. "Let the beauty of what you love be what you do." ~ Rumi

Promote Your Page Too